In Remembrance Of Patrick E. Yahle 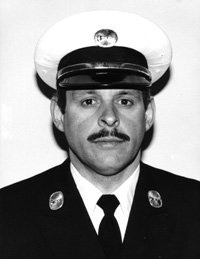 Lt. Yahle died suddenly at Miami Valley Hospital as a result of injuries received from a boiler explosion at an apartment on Simms Street on November 10, 1988. Several other firefighters were also injured, two severely, but all recovered.

Lt. Yahle and another firefighter were several feet away from the boiler when it exploded. Both were knocked unconscious and were briefly trapped in the rubble from a partial collapse of the building.

He is buried in Calvary Cemetery.